Less More
9 months 3 weeks ago #61249 by Jnani
Replied by Jnani on topic BLADDER EPICHECK by Nucleix
After ~ a week of communication with Nucleix concessionaires in Scandinavia (it is not performed in Israel) and in Israel,  their Int'l product manager updated me today that sending a sample of mine to one of the labs in Europe, won't work.
They are trying to make Epicheck available in Israel in the near future.   (my Prof. says he's been hearing this for a year already

Good health to all.
The following user(s) said Thank You: joea73

Less More
10 months 16 hours ago #61247 by Jnani
Replied by Jnani on topic BLADDER EPICHECK by Nucleix
After I read the excellent!! information Joea73 shared, I asked the Prof. who is treating me whether he would like to compare what we received from Cytology with Epicheck.   His reply was that Epicheck is not available in Israel in the last 2 years.
I emailed Prof. Leibovitvh and Nucleisx. (hoping for a workaround) Not replying.

Thank you very much!   Only Good news and the very best to you and to all the participants here.

Less More
10 months 4 days ago #61229 by joea73
Replied by joea73 on topic BLADDER EPICHECK by Nucleix
I  do not know enough to tell which one to choose, but I have noticed urologists use cytology first and if the answer is not clear such as Atypical or suspicious for high grade urothelial carcinoma the urologist uses biomarker based urine analysis to confirm the result of cytology.

Cytology test is based upon a cytopathologist examining dead or live cells in urine which were fallen from the bladder wall.

In 2013, the  international cytoplathologists group published the new guidelines to improve the accuracy for cytology report and came up with 7 classifications (The Paris System).  The professor of Yale School of Medicine gave a webinar and the risk of malignancy of each classification based upon Yale's experience.    Notice if the cytology report says High Grade urothelial carcinoma, 90% were found with cancer.  Also, if cytopathology report says Negative for UHUC, 90% chance that there are no UGHC.  So I feel confident that I can use to check if I have HG bladder cancer or not.

Below table shows cytology and other urine analysis available in the market.  If you scroll the bottom of the table, Sensitivity and Selectivity will be shown.  Different urine analysis tool uses different methods. 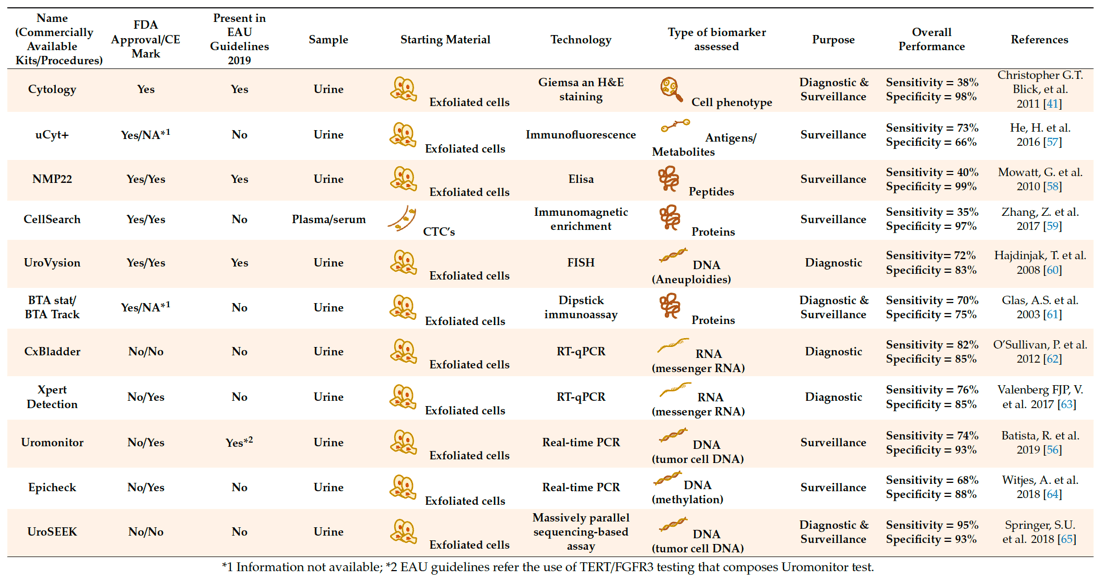 Less More
10 months 4 days ago #61228 by Jnani
Replied by Jnani on topic BLADDER EPICHECK by Nucleix
You are amazingly kind, Joea73.

I came across this technology yesterday, Prof. Ilan Leibovitch's hospital department is approx. 20 km from where I leave
Seeing the complexity of tests' results characteristics, I thought it will be a good idea to write here, and hoped You will see and reply!

If I may ask,  what would you choose?  Cytology or Epicheck?  (not sure both will be possible)
Prof. Leibovitch is associated with the medical org. I'm a member at, so I guess it should not be a problem for me to get it

Less More
10 months 5 days ago #61227 by joea73
Replied by joea73 on topic BLADDER EPICHECK by Nucleix
I always get confused of selectivity and specificity so I apology ahead of time that there may be mistakes.  Anyway, I will try to explain to your questions.

First, I have checked the company web site of Nucleix.  I think the technology was developed by a company in Israel.  EPICHECK uses DNA methylation bio markers.


Negative Predictable Value (NPV)  excluding the test for TaLG due to inaccuracy
It is the probability of an individual being truly negative when EPICHECK says negative.


Performance comparison of Cytology and EPICHECK

Cytology accuracy in prediction according to they study done by McGill University , Montreal, Quebec in Canada in 2015

When Cytology was used with another urine bio marker NMP22 BladderChek (N), the sensitivity improved to 94%.

The study of performance of cytology and other urine biomarkers
pubmed.ncbi.nlm.nih.gov/25037483/
The following user(s) said Thank You: Alan