Less More
5 months 3 weeks ago - 5 months 3 weeks ago #61089 by joea73
Replied by joea73 on topic Bluelight cystoscopy 101
Light has energy.  The shorter it's wave length (the higher it's frequency) . the higher it's energy is.    In visible lights, blue light has the shortest wave length and the highest energy and red light has the longest wave length and the weakest energy.   When bluelight hits an atom, its the electron(s) of the atom absorb the energy of blue light and jumps to higher orbits.  The electron(s) of the atom at higher orbits drops down to the original orbit.  When an atom is falling down to the original orbit, some energy which the electron(s) had absorbed will be converted to heat.  The remaining energy will be converted to light.  Because the energy converted to the light is less (due to some lost to heat ) than the original (blue) light, its wave length will be longer and the color will be shifted toward red.

A molecule is an aggregate of atoms.   When blue light hits a certain molecule, electrons of the molecule will absorb the energy of the blue light and emit red light as the electrons of the molecule lose it energy.   This type of molecule is called fluorescence.   The well known fluorescent molecule which cells in our body are capable of producing is Porphyrin (Protoporphyrin IX).
When a natural metabolite 5-ALA ( 5-aminolevulinic acid ) is applied topically to the tissue with cancer cells and normal cells or taken as pills, cancer cells tend to accumulate Protoporphyrin IX more than normal cells, sometimes 10 time or more.   When blue light hit the tissue, the area of cancer cells absorb the energy and emit red light but the area of normal cells do not absorb enough energy and reflect the blue light.   This phenomena gives a surgent a contrast view of the area of cancer in red and normal tissue in blue and make it easier for the surgent to remove the cancer but leaving normal tissue intact.   This is also called Photo Dynamic Diagnosis (PDD).

It is interesting to know that mitochondria in our cell, which is well known to produce biological energy ATP (adenosine tri-phosphates)  by consuming sugar from our diet and oxygen in our red blood cells, plays a main role in the metabolic process to produce the light.  Our blood vessels carry red blood cells along with various nutrients.   Wikipedia says each human blood cell contains about 270 million hemoglobin molecules, and each hemoglobin is made of four Heme molecules each of which is attached to a globin protein and each Heme molecule binds to one oxygen molecule.  So, each hemoglobin molecule carry 4 oxygen molecules.  Accordingly, one human red blood cell carries about 1 billion oxygen molecule.     The structure of HEME is figure B and the figure A is Porphyrin (Protoporphyrin IX).  HEME molecule is produced by iron atom (Fe) is attached to Porphyrin by enzyme called Ferrochelatase.  Once Heme is produced, it goes out of mitochondria and binds to globin protein to make hemoglobin.
The problem is that cancer cells cannot produce enough Ferrochelatase enzymes.   So, When much natural metabolite 5-ALA ( 5-aminolevulinic acid ) are applied topically to the tissue, e.g. bladder, mitochondria produces many Porphyrin.
It is said cancer cells cannot produce sufficient Ferrochelatase enzyme compared to normal cells.  So, normal cells continue to produce HEME, but in cancer cells, many porphyrin molecules are accumulated.  As Porphyrin molecules produce red light when he are exposed to blue light, and cancer cells have more porphyrin molecules, cancer cells emit red light (10 times brighter than normal cells). So for a surgeon's eyes, normal cells look blue and cancer cells look red, which makes easier for the surgeon to distinguish cancer cells from normal cell.   Cysview (TM) is also called Hexaminoleulinate (HAL)  hydrochloride is a chemical which makes  5-ALA ( 5-aminolevulinic acid ) once it gets into cells.

Less More
5 months 3 weeks ago #61087 by joea73
Bluelight cystoscopy 101 was created by joea73
I have not done Bluelight cystoscopy (BLC) because my local hospital does not have it, but I am aware that a major cancer center near by has Bluelight cystoscopy and it is used during TURBT for some specific non muscle invasive patients usually with CIS and high number of tumors.   I am also aware that now they come up with flexible blue light cystoscopy which can be used in a regular cystoscopy environment.   In 2018, AUA came up a consensus  report on optimal use of bluelight flexible cystoscopy.  UT Southwestern Medical Center, Dallas, TX USA published the summary of the consensus report  in 2019.  The relevant links are listed at the bottom. 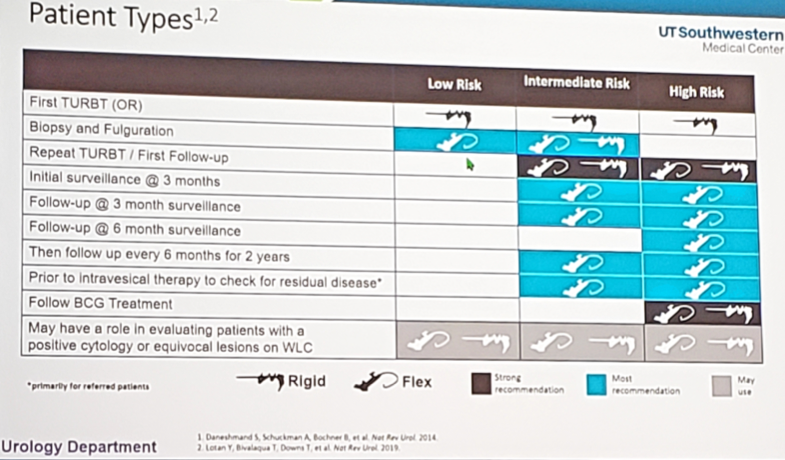 In reality, it seems only certain hospitals in large metropolitan cities have bluelight cystoscopy.   According to the company website of Procure, which manufactures and market Cysview - photosynthetic chemical for bluelight cystoscopy,  145 BLCs are installed in the US, mainly concentrated in California (24), New York(14), Florida(10), Pennsylvania(7), Texas (6), Massachusetts (6) ,Illinoi (5),etc..  On the other hand,  those smaller states have no BLC installation, i.e. New Mexico, Wyoming, Montana,  North&South Dakota, Main, Arkansas, Hawaii, Alaska.   Acknowledging BLCs are not always available, 2021 AUA guideline for NMIBC recommends BLC, IF AVAILABLE , to reduce recurrence.    BLC cystoscopy using Cysview chemical had been approved in 2010 by FDA.  Considering BLC had been approved 12 years ago, 145 BLC installations in the US seem to be low.  I think one of the reasons is the cost.  Cysview charges 1,000 which should be covered by insurance since it is FDA approved and AUA recommends it.  It is the cost of the hardware, FDA approved Cysview in pair with  Karl Storz D-Light C PDD system, which consists of a light source, a camera and a telescope, which costs  US$100K- US$150K.  Cystoscopy market is shared by Olympus and Karl Storz.   Urologists  in private practice and small local hospitals already with Olympus cystoscopy have to invest in Karl Storz PDD system.  This may explain disparity of BLC installations in the US.  I will explain how Blue light cystoscopy works later.


Concensus report on the optimal use of blue light cystoscopy
www.ncbi.nlm.nih.gov/pmc/articles/PMC7136177/